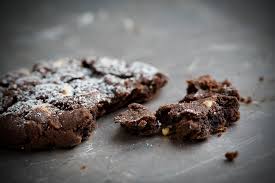 It didn’t happen to you.

It didn’t happen to you. It wasn’t your cookie that got stolen out of the jar. That fact alone makes a stolen cookie that much easier to ignore even with physically visible crumbs left over from the event. But when the thief is a friend, a very close person in your life, just to protect them I’ve learned that it is possible for those protectors to be so naive and blind to the crumbs that are right in front of their noses. It becomes easily justifiable that they didn’t see the act itself. A cookie is missing from the jar and the crumbs are trailed along the counter top. But the cookie obviously did not get stolen if you did’t see the thief In the actual act itself, right?

There is always a line.

It’s been 20 minutes since I heard a sound. The lights are off. I’ve practiced sneaking up the stairs countless times… this cookie is soon to be mine. But when I go upstairs Mom comes out to get a glass of water and asks me what I’m doing. I stop what I’m doing immediately. I lie. She goes back to bed thinking I was just upstairs for a glass of water myself and I go downstairs to rethink my game plan. Every time I go upstairs I get a little bit closer to my goal until one day, I have my hands on that cookie. Every time I almost get caught, I get a little bit smarter, I cover my tracks up a little bit better until finally I’ve eaten the cookie and nothing is left but the crumbs I forgot about on the counter. Sneaks are sneaky. If I’m going to steal a cookie I’m not going to stomp up the stairs, drag the chair loudly across the floor, sing and hum as I’m doing it. No. I’m going to wait until I know I’m safe, so that no one suspects me of committing the act. I’m going to choose the cookie that I think will leave the least crumbs. I’m a thief, I don’t want to get caught by leaving obvious evidence. That’s the entire art of commuting a guilty act

How do I as a thief ensure that the cookie I pick leaves the least amount of crumbs? I test them out. When I picked the cookie up, when I touched it for the first time, did it drop out of my hands, did it crumble? Did I watch this cookie from the beginning and know exactly what it’s made of since I watched the baker make it? I didn’t say sneaks were unintelligent. The more you know and the closer you are to the cookie you plan to steal, the safer the act of stealing the cookie becomes. But sometimes cookies are unpredictable and the ones you think are the safest turn out to be the ones that crumble on you and spill all over the floor.

We protect what protects us.

To the person’s family and friends, they’ve built up such a trusting relationship with the ones that love them, how could they believe such an innocent person would sneak a cookie? They would never do such a thing, and the cookie crumbs? Ah, they must have just appeared out of thin air. Someone must have their story wrong and the factual proof of cookie crumbs somehow becomes not enough. To the sneaks distant friend, maybe they’ve seen this person do something questionable in the past so stealing a cookie would be quite believable, but to all the others that know nothing but the good about this thief, how could they believe they would take a cookie they didn’t have permission to take? They have no reason to and this feeling of belief is so strong based on only what they know (ignorance is bliss) that the crumbs and chair leading to the cupboard are simply put back into place and so conveniently forgotten about. If the thief has protected you in any form in the past, you’ll be tempted to protect the thief should they need protected and that’s a beautiful tool for a thief when they are caught in the cooking stealing game.

When someone who has no previously attained feelings attached to the thief makes a decision of guilt based on purely facts and evidence, the protectors will sustain their role that they’ve so fondly attached themselves too. With no doubt they will claim the person basing a decision on the photos of the crumbs and the vivid description of the scene to be wrong. How could someone they know so many good things about be capable of being a thief. We stand by being right and promoting our beliefs more than we tend to open our eyes to legitimate facts and evidence. Smart sneaks make this especially easy to convince and maintain their protectors because they’ve hand selected the cookies they’ve stolen and been very cautious about the tracks left behind.

I hope it never happens to you.

I hope you never witness a cookie be stolen from a jar and watch as the protectors separate themselves to stand by the thief. It will hurt. It will make no logical explanation to you and it will show you the power of manipulation and the art of being a thief.

I won’t lie and I will say that a small part of me hopes that all the those protectors in the world will at some point experience the flip side of having a cookie stolen, to watch it happen with their very own eyes and have a mass of people scream and protest at them that they don’t know what they are talking about while they stand silently with the crumbs of what is left of the stolen cookie in their hand.

I am not the cookie that got stolen but I am someone who holds onto the crumbs of one who was. If I feel this way, I can’t even begin to imagine how the cookie, the direct victim of the act must. To lay in a mass of crumbs and to be told you are not the remains of a cookie that was stolen. To be told this by the mass of people who care more about protecting their beliefs that were cultivated by the master thief them-self…

I am so sorry if this is you.

Sexual assaults happen everyday, countless times to men and women, girls and boy. They are made victims by strangers, by those who hold trust positions in family systems and workplace hierarchies. Sexual assault situations are difficult enough for victims and the families of victims without the inclusion of chosen ignorance. This one is for all the crumbled cookies out there & those that hold their remains in the palm of their hands, particularly for those in difficult family situations. This is an extremely important topic to me and I hope you were able to take something from this read. If anything, know that you are not alone.